Racing events, drivers, cars or anything else from the past.
Post Reply
24 posts

Cheeveer wrote: ↑
5 months ago
I figured!

First time over 200mph then? That's a taller order. But could that have been 1968 already?

Funnily enough, nope. Once they acquired wings and bigger wheels, they got slower again because of the increased drag. I would guess it was late-70s into early-80s before 200mph was topped. The 1974 Ferrari could only do 192mph for example.

PTRACER wrote: ↑
5 months ago
Thank you so much, we are glad you can be here for this.

That's sarcasm, right? What did I say wrong??
Top

PTRACER wrote: ↑
5 months ago
Thank you so much, we are glad you can be here for this.

That's sarcasm, right? What did I say wrong??

Friendly sarcasm, in return for you converting to kph for us

PTRACER wrote: ↑
5 months ago
Friendly sarcasm, in return for you converting to kph for us

Got it. I thought perhaps it was sarcasm based on the fact that getting to 278 kph wasn't really relevant to the question being asked!
Top

PTRACER wrote: ↑
5 months ago
Friendly sarcasm, in return for you converting to kph for us

Got it. I thought perhaps it was sarcasm based on the fact that getting to 278 kph wasn't really relevant to the question being asked!

It is actually interesting to know, since I haven't heard much about top speeds for cars between say, 1952 and 1959. Only very rough figures.
King of the Race Track, Destroyer of Tyres, Breaker of Lap Records
Top

Cheeveer wrote: ↑
5 months ago
I figured!

First time over 200mph then? That's a taller order. But could that have been 1968 already?

If a 350hp Alfa 158 could reach 192mph in 1950, then the 420hp Alfa 159 of next year should reach 200mph.
I've got other interesting info, coming from "Team Lotus - My view from the pit wall", written by Peter Warr, page 84.
During the 1970 Italian GP Jochen Rindt had the tallest top gear ever fitted in a Lotus Formula 1 Car - appropriate for 204mph. This may be the highest maximum speeds achievable for DFV powered car for some time, as that grand prix was one of the last ones where some cars would run without wings.
Top

JBT wrote: ↑
5 months ago
Ah, looks like the same question is on you guy's minds as mine was in the 'Drivers you admire' thread!

Somewhere i've got a file I put together a long time ago of the highest recorded F1 top speed I could find for years between 1950 and 2010ish, I'll try and find it and post it.

Where I haven't put a source, If I remember right the figures came from a forum post on the Autosport's The Nostalgia Forum. 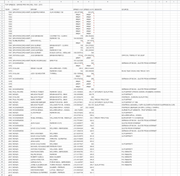 I noticed I had a speed of over 200mph / 322kmh for 1950, again I think got it from a forum post on TNF, but that must have come from somewhere more 'official' in the first place as the numbers a pretty specific.
"I decided i was going to go into it flat, so i did" Nigel Mansell, 1990 Mexican GP
Top

Adding a bit more info, found this Autosport TNF forum post by Doug Nye while searching for something else:

"Perhaps these contemporary tyre notes might be of interest?

Dunlop really had their backs to the wall early in 1967 as the new Firestone 108 tyres offered better handling, better grip, better wear and enhanced lap times.

For the Belgian GP at Spa the H16 BRM was fitted with 27.35-inch diameter Dunlops and was geared to reach 198mph at 11,000rpm. On the dyno pre-race the engine used developed a maximum 388bhp. Firestone could only offer low-profile tyres which could not be fitted on either the H16-cylinder or V8-cylinder Tasman BRMs.

Goodyear offered a version of their 154 compound in suitable sizes, which would give a 27-inch overall diameter rear tyre. Dunlop offered their standard tyre in 006 compound (dry) or 970 compound (wet). With 15-inch wheels fitted to accommodate larger brakes the P261 Tasman BRM pulled only 9,600rpm as compared to 10,100 on smaller whels and tyres the previous year.

Stewart lapped at 3:35.9 on Dunlops, then on Godyears he ran out of fuel on his first lap so could not set a comparable time, but he commented as follows: “Breakaway on the Dunlops was sudden and vicious in the slow corners and I daren’t take risks in the fast 150mph curves…”.

On the Goodyears even his brief experience persuaded him that the car was faster on the straight – 11,000rpm and lifting off! – handling was “nicer and more predictable”. Photographers told the team the Dunlop tyres could be seen to be deforming on the long straights. Brabham reported that when he came up close behind Stewart he could actually see the tyre sidewalls pulled an inch clear of the rims. Dunlop admitted this type of tyre had NEVER been tested on their high-speed test rig. Both Jackie Stewart and Mike Spence said “Forget it” when asked about their willingness to use the Dunlops again. Next time out on Goodyears JYS clocked 3:34.9."

So, Stewart's P83 or P115 H16 (not sure which one he ran in practice) could pull 11,000rpm in top gear at Spa, on Goodyears, which even without doing the maths would have only been a few mph slower than the theoretical 198mph on the slightly larger dia. Dunlops. And much less scary, it seems. If you can class any lap of 60's era Spa in a 380bhp bathtub as 'not scary'.
"I decided i was going to go into it flat, so i did" Nigel Mansell, 1990 Mexican GP
Top

I don't think the BRM was able to pull 198mph despite being geared for it. The Eagle pulled 196 rather than 198. Either way, they were the fastest cars I reckon until the 1980s..
King of the Race Track, Destroyer of Tyres, Breaker of Lap Records
Top

It's funny that 'Top Speed' is relevant yet so irrelevant to Formula 1/Grand Prix Racing. Once I really got interested in reading about F1 history it became quickly apparent that the powers that be have and will continue to place regulations on engines to limit them. The early engines were beastly and the top speeds are really no different to today. While the size/capacity has gone down over time, the technology and output for the size has increased. It's cornering speed that has totally changed the landscape for F1.
"Speed is relative and I knew that I was going faster in my head than he was in his head. If you keep seeing objects going by quickly, well then going quickly becomes normal for you."
Joann Villeneuve
Top
Post Reply
24 posts