This I've had for some time, I can't locate it in any topic, but I've found another version of it, with a note on the back.

I found the incident curious enough to merit an identification attempt, so please help if you can. I've done the Worthpoint back catalogue for eBay items I might have missed, and sure enough, there were several things of interest, and you've seen all of those in the latest of my posts.
If you strike me down I shall become more powerful than you could possibly imagine.
Top

I agree, this is an interesting incident, and it would be good to know the particulars, but it's not going to be easy to identify the event. Midget research in this era is *quite* difficult because of the sheer mass of races (we're talking thousands per year!), but some day someone will have all the results, I'm sure. I'm not particularly keen on being that person, but as things stand I don't see many others involved in this business, so maybe it will be me. But don't expect rapid progress in this matter.
Winning isn't everything, but it's somewhat better than finishing second! -- Bruce McLaren
Top

Thanks for the effort so far. I vaguely remember Manning's name from the old Revs site, so perhaps the same image is there, with possible specifics. I'll have a look. And I think 1930s is the right decade.
If you strike me down I shall become more powerful than you could possibly imagine.
Top

Hang on, where does it say Gilmore Stadium? It's just a guess by the guy who sells the picture, right? Gilmore usually ran Thursday nights, and this is a daytime race!! That crash wall looks very peculiar, I'm sure that can be identified.
Winning isn't everything, but it's somewhat better than finishing second! -- Bruce McLaren
Top

So. This is the most random coincidence that could have ever possibly occurred. 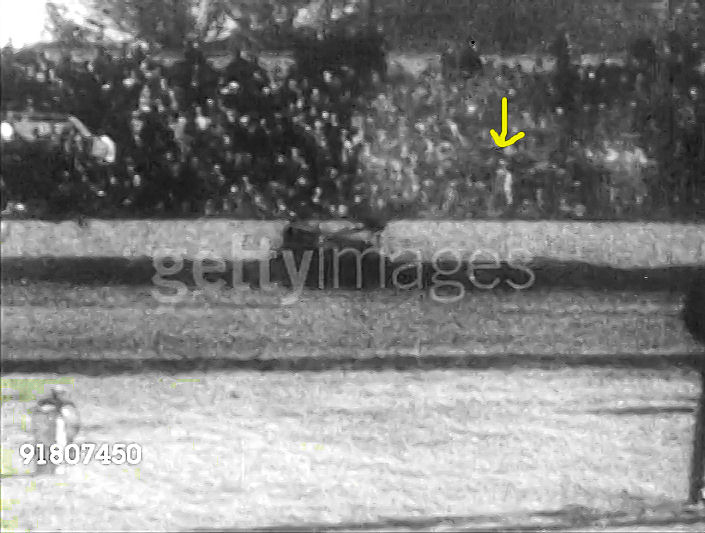 Does that help @Michael Ferner or @Jesper Hvid ?
King of the Race Track, Destroyer of Tyres, Breaker of Lap Records
Top

Yes, Gilmore is out, and so are probably the 1930s. Thanks for the video! Haven't seen BTS. We can invest in that, see what else is on there.

https://www.ebay.com/itm/Born-to-Speed- ... :rk:1:pf:0
If you strike me down I shall become more powerful than you could possibly imagine.
Top

Actually, everything past 1947 is out, which makes the thirties much more likely!

Michael Ferner wrote: ↑
2 years ago
Actually, everything past 1947 is out, which makes the thirties much more likely!

For sure! I've "obtained" a copy of the movie. All movie scenes on the track were filmed at Bakersfield Speedway. It also mixes up with some 'stock' footage, which may also be Bakersfield. So that would leave us with 1946/7, right?
King of the Race Track, Destroyer of Tyres, Breaker of Lap Records
Top

Yeah, something like that. Vuko was barely out of his teens in the late 1930s, anyway, so that's unlikely.
If you strike me down I shall become more powerful than you could possibly imagine.
Top

If you strike me down I shall become more powerful than you could possibly imagine.
Top
Post Reply
10 posts • Page 1 of 1