DePasquale into the garage, a real shame after qualifying provisionally on pole for today's race.
Top

SVG wins from McLaughlin and Coulthard in a dull race.
Top

Vassago wrote: ↑
8 months ago
Roof damage from rear-ending the barriers

It happened earlier in the year as well..... but came off at Bathurst on the BJR Macauley Jones car in practice this year when he went rear first into the barriers.

theracer120 wrote: ↑
8 months ago
SVG wins from McLaughlin and Coulthard in a dull race.

Yeah I missed most of the race as I had to go out... just watched the highlights.

Highlighted by an unforced error from Whincup when in 2nd place. He finished 8th in the end, meaning that insted of RBR taking a big haul of points in the tight title race for the team championship for a 1-2 finish, ahead of both DJRTP cars.... instead DJRTP ended up 2&3 and extended their lead in the championship to 143 points, with 288 still on the table for tomorrows final race. Works out it was a 66 lost points mistake.

A great comeback from Scott Pye, who started last after a qualy crash brought out a red, driving through to finish 6th... not bad considering he missed P2 and spent the night in hospital with a gastro illness.

So the season ends tomorrow with a qualy session, a Top Ten shootout and another 250 klm race. 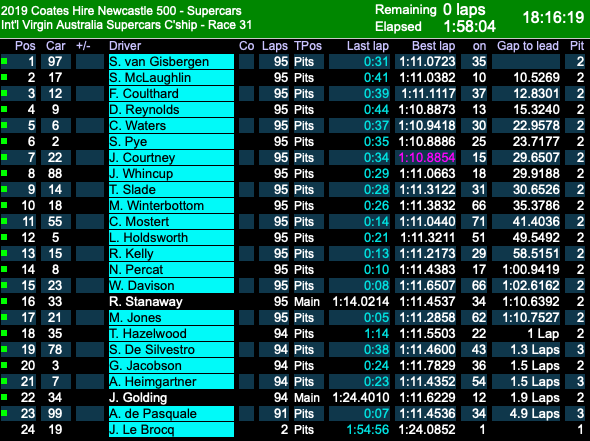 We have just had qualifying for todays race, with Waters in his Monster Mustang taking provisional pole with the fastest lap of the weekend.
SVG missed out on getting into the top 10 shootout when he made a mistake on his final lap in the last minute flurry, so he will start the race from 18th.
Mostert also missed out on the top 10 by 0.0005s.
DJRTP seem to be strengening their bid to win the team championship, with both cars guaranteed a top 10 start (wrecking a car in the shootout being the only way they wont) on a track where a good result seems to be determined by how high up you start, thanks to the difficulty here in passing.

The top 10 below will take part in the shootout later to settle the first 10 positions on the grid. 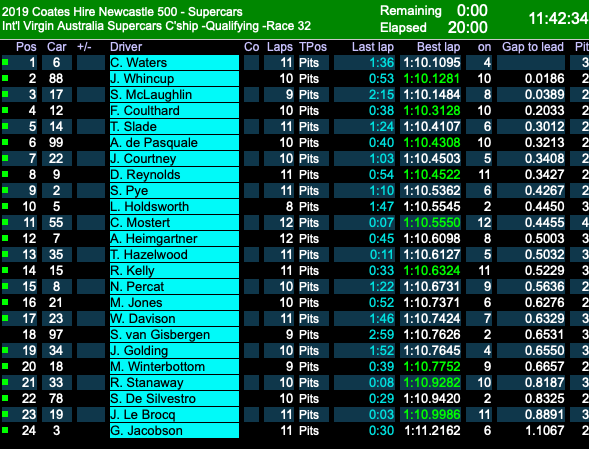 Last edited by Everso Biggyballies 8 months ago, edited 2 times in total.
*My woman cant wrestle. But you should see her box!*

And someone has rolled in the Aussie Racing Cars, what a shocker...


That was an interesting one, he rolled the car off of the kerb.
Top

And another Toyota pileup at turn 2.

Think about 8 cars got some degree of damage in that.
Top

They (the Toyotas) seem to be good at having more than their fair share of carnage.... st least the cars seem to stand up to heavy impacts in terms of driver protection if not car preservation.
*My woman cant wrestle. But you should see her box!*

Whincup on pole from Waters, Coulthard and McLaughlin.

SVG has been dropped another 3 places for impeding cars in qualifying.
Top

And for the last ever diesel SuperUtes race we have a field of... 6.
Top

One spun out and somehow missed the wall, then flick spun it and bumped the fence

Hehehe sounds about right. I must confess to not watching the utes..... they just dont do it for me. When they come on its time to do other things. Its a worry when laundry and vacuuming gets priority over racing.

theracer120 wrote: ↑
8 months ago
Whincup on pole from Waters, Coulthard and McLaughlin.

SVG has been dropped another 3 places for impeding cars in qualifying.

Whincup yesterday and SVG today are making it difficult for RBR to take the 2019 team championship away from DJRTP. Their hopes now lie with aDNF for one and a poor result from the other, with SVG storming through to get a decent result. Im sure the DJRTP pit wall are telling the drivers to stay out of trouble and dont try anything too radical in the race as I reckon both in the top ten would seal it.

I think they have to score 145 points from both cars to take the title even if RBR were to finish 1-2, so a win and a DNF would do it. If one car finishes 4th the other just has to finish ... and that is with an RBR 1-2 which is highly unlikely given the grid positions.


edit: In fact just seen the options printed up

The following sets of results tip DJRTP past the magic 145 points haul:

Last edited by Everso Biggyballies 8 months ago, edited 2 times in total.
*My woman cant wrestle. But you should see her box!*

That was the first Ute race I've watched in months. I'll give them a go next year when they switch to V8s but I'm not convinced it'll improve much until they can get more entries.
Top

Jack Smith runs out of talent again, he is definitely not ready for the main series yet.

Jordan Boys wins the final Super2 race of the year.

Bryce Fullwood finishes 2nd and takes the championship by a considerable margin.
Top

I have been quite impressed by Fullwood this year in both Super2 and his enduro drives. Jack Smith, well, not so much and a waste of a main game seat. Money overides talent in that case.
*My woman cant wrestle. But you should see her box!*