Post your requests for pictures, videos or documents here and we will find it for you!
Post Reply
35 posts

These are (most of) the offline photos from the Touring/Saloon Car Crashes project for the CPdB. Please help where you can.


theracer120 wrote: ↑
10 years ago
Here are some improved versions of early accidents from the Bathurst 500 (1000), along with some new ones:
Different angle of Fred Gibson/Barry Seton's Ford Falcon GTHO on the tow truck after he rolled in 1969 race:

Hahnle/Peter Wherrett (driving at the time) flipped their Alfa in 1969, but they got back in the race eventually:

Two unknown accidents, one occured with a Mini, pretty certain the first one was in either '67 or '68:

Various angles of the 1969 crackup:

Bill Stanley was really pushing in 1971, note the hilarious caption at the bottom:

Bill Brown's car after he rolled in the '69 race, starting an enormous pileup:

Johnnie Walker in a creek at Sandown in 1970 or 1971, probably in a series production race judging by the number having a class letter beside it. It might have been the Sandown enduro if that was case, if so it would be the 1971 edition as he DNF'd in a Torana like the photo that year, whereas he was in a Valiant in 1970. I suppose it could have also been in the South Pacific Touring Series or another non-championship race as well.
2 OFFLINE (@theracer120)

Colin Bond rolled in the '72 race. Note how the car looks way more damaged in the last pic then in the first two pics. That's because according to Bond, the tow truck driver was a Ford man. When he was towing it back to the pits after the race he deliberately bashed the car against the wall in an attempt to destroy it more then it was.


mattbull wrote: ↑
11 years ago
Back in 1989 one of the support races at the British Grand Prix was for the one make Mini Metro series! Former Metro 6R4 Rally star, Tony Pond, took part in the event in a celebrity car but he had this scary moment at the complex (which was less complex than it is now!). As you can see from the first pic, Pond spun and petrol seems to be pouring out of the right wheel arch area. In all probability it was the leak that caused him to spin, obviously the fire that engulfed the car was a concern, but it very quickly subsided and the excellent marshalls were very quickly on the scene to deal with the flame that was left. Pond had largely retired from competitive driving at this point, being left high and dry when the Group B rally cars were banned from the sport (the Metro 6R4 very much part of the Group B era). On 6th June 1990 he teamed up with Austin Rover and took a standard production Rover 827 Vitesse around the Isle of Man TT Motor Bike course, being the first (and only) man to average over 100mph on in such a car. Unfortunately Pond succumbed to cancer in 2002.


mattbull wrote: ↑
11 years ago
This crash happened on 23rd September 1989 at the Knickerbrook corner at Oulton Park, which at that time was a fantastic challenge, until they plonked a chicane in it! My memory suggests that the drivers name was something along the lines of Paul Donantonio, the series was certainly the Renault 5 Challenge and I do recall there being contact with another competitor that lead to the crash. Thankfully Paul, if that was his name, was uninjured.


theracer120 wrote: ↑
6 years ago
Mark Skaife flipped his Nissan GTR in a support race for the 1990 Australian Grand Prix:


mattbull wrote: ↑
11 years ago
Brands Hatch 17th March 1996 and a biggee in every sense of the word from the Alfa Romeo Challenge race. Harvey Townson (32) and Adie Hawkins (98) are the main victims of a first corner tangle which spears them both left into the tyre wall at the bottom of Paddock. Luckily there were no injuries.

Wayne Gardner or David Brabham getting a tow out of the sand trap in the 1999 race:


theracer120 wrote: ↑
8 years ago
John Teulan crashed a Nissan Skyline GT-R at Bathurst during a supporting race for the 2000 Bathurst 1000:


theracer120 wrote: ↑
12 years ago
Here is Jason Richards spectacular crash in the V8 Supercars in 2008: 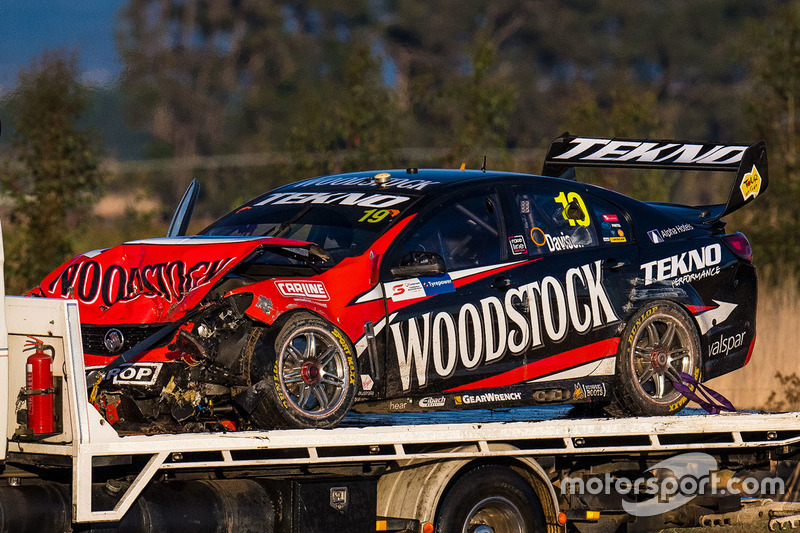 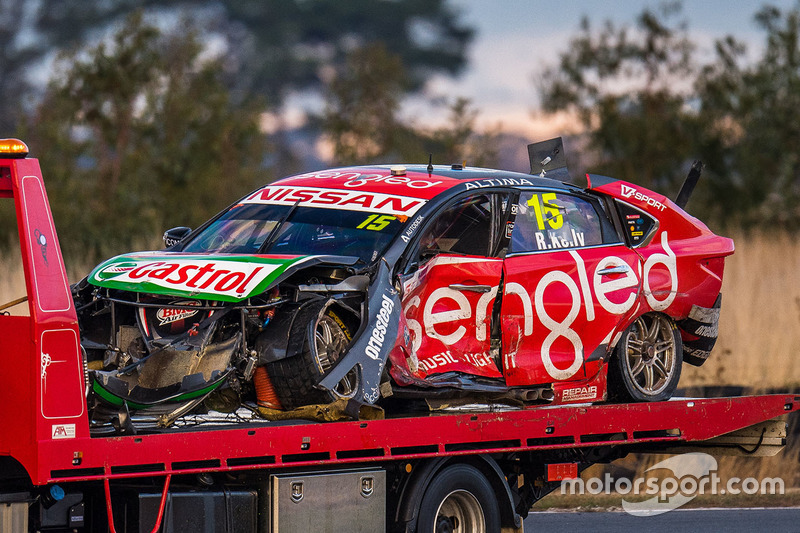 Also, there was a similar (albeit much smaller incident) at the same spot earlier in the day in the Dunlop Super2 Series where Macauley Jones got turned around and was t-boned hard by his teammate, with two other cars being involved.
https://media2.speedcafe.com/wp-content ... 44x213.png
+3 OFFLINE (@theracer120)

Either the sadly now departed Jason Richards or Angus Fogg off in the sand trap in the main race:


Motorsportrace wrote: ↑
3 years ago
I can't read German, so I'll leave this here for @hollie3sa:

Aiden Moffat went off avoiding a rabbit at Thruxton during yesterday's test session. This was the result.
https://www.touringcartimes.com/wp-cont ... 00x398.jpg
@kart99

It looks like 2 different cars, but it can't have been. I just don't get why the wheels are on and then off.
If you strike me down I shall become more powerful than you could possibly imagine.
Top

Both of the pics:

Denise McCluggage upended her Mini Cooper S during the 1964 Brands Hatch 6 Hour. Video exists of this, although I no longer have it:
https://revslib.stanford.edu/catalog/zy560vy4519

I'll look for the video, pretty sure I have it, and that it's also on British Pathé.
If you strike me down I shall become more powerful than you could possibly imagine.
Top

The article is in a quote, not a pic. See original post.
If you strike me down I shall become more powerful than you could possibly imagine.
Top

I've probably got the Slotemaker and the Ömer, but I doubt I saved anything else.

I'll look for those plus the McCluggage video.
If you strike me down I shall become more powerful than you could possibly imagine.
Top

All I've got is the censored thumbnail showing the fatally injured photographer, from the other link. Both links work.

http://www.motorsportmemorial.org/focus ... =ct&n=2446
If you strike me down I shall become more powerful than you could possibly imagine.
Top

These were probably the 5 posted by fabio181.
If you strike me down I shall become more powerful than you could possibly imagine.
Top

As per usual, thank you very much @Jesper Hvid. Some of the photos have already been added to the CPdB.

Please note one thing: I've updated the Request for Samuel Butler in the 1912 Glidden tour. There apparently was a total of 47(!) photos.

About the Chuck Jones-Mosport-crash: I'm assuming his accident happened during a support race to either the 1967 Can-Am race (Player's 200) or the 1967 Canadian Grand Prix. Do you happen to know which one it was?

1911 Glidden Tour, not 1912. Or have you discovered an error? Please check. I picked the 12 images out of the 47 which were relevant, and you may rest assured I didn't omit any.

Entry list: https://www.racingsportscars.com/covers ... 08-27e.jpg
If you strike me down I shall become more powerful than you could possibly imagine.
Top
Post Reply
35 posts