Music old and new, musical instruments and musical theory. No copyrighted MP3s may be posted in this forum!
Post Reply
185 posts

Perhaps a more appropriate artistic depiction of the story behind the music / poem? 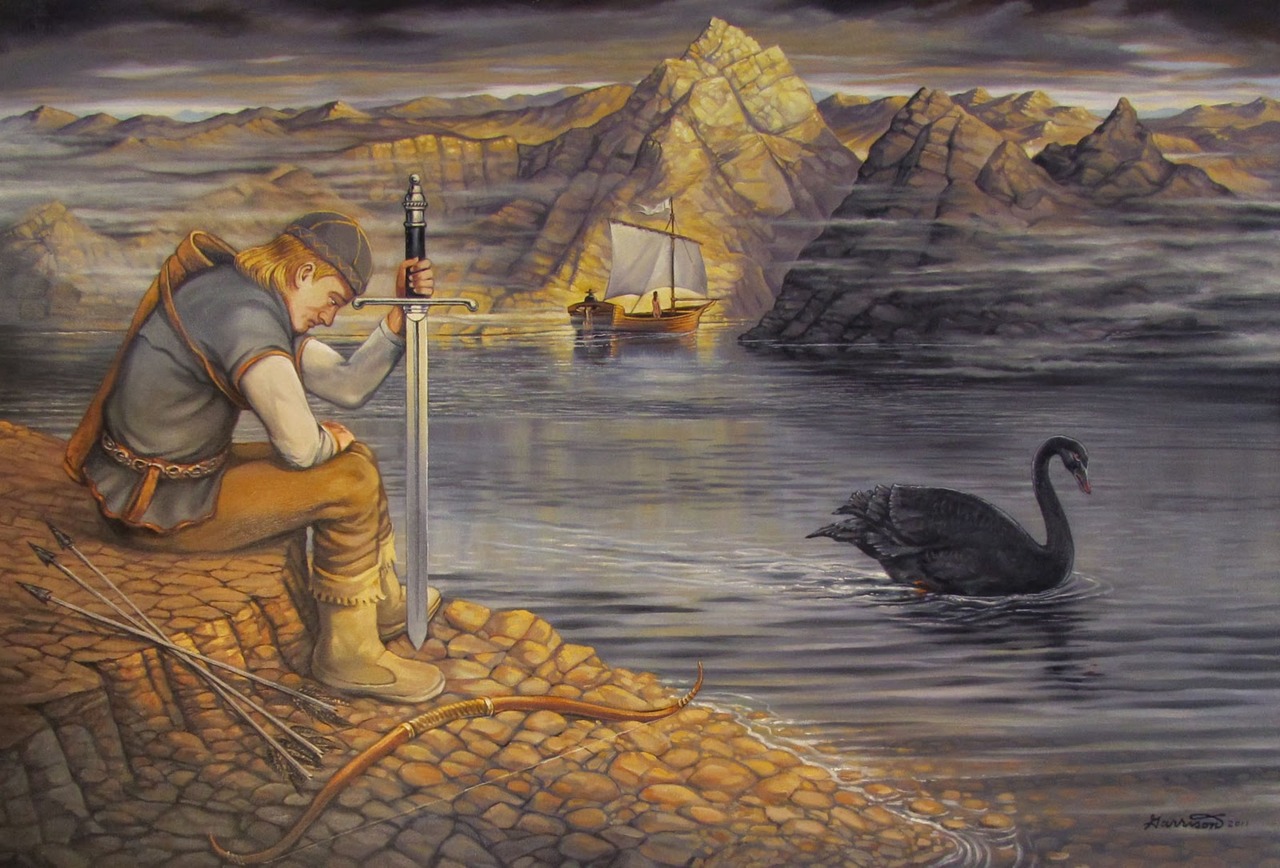 Fixed ?
*Sebastian, Lance is faster than you... do you understand?*

Poor old Prommy, must be pecked right down to the skeleton, by now. Eagles usual aid the good guys in mythology, so he must have trod on their eggs or something. Anyways, the discovery of fire isn't a "human invention". Nor is its worship:

But all our troubles started for real, then.

Without a single image to do with Denmark... Ignore the visual representation. It's some kind of themeless symphonic poem, which explores Oriental possibilities later on, by no means his best work.
If you strike me down I shall become more powerful than you could possibly imagine.
Top

The idea of the sublime in nature as depicted in art is something out of the romantic movement, and Night On Bare/Bald Mountain by Mussorgsky to me achieves the all-time best thematic representation in classical music, but this also has its strong points. This sort of thing exists to this day in movie scores, where it tends to add the essential Gothic element. A powerful atmospheric and frightening thing. Triggers the primal fear in the human psyche, but in a sophisticated manner. True art. Superb.
If you strike me down I shall become more powerful than you could possibly imagine.
Top

Tranquility before the Great Storm. Always a warning sign.

But the Empire was not a product of the romantic movement.

Fact remains, we owe Western civilization to Britain. Rule them, and all.

THIS WAS THE CHARTER! Not some shining shithouse on some far distant hill, or some other dark, satanic mill.

Ah, sod it, either you get it or you don't, let's go Oriental.

Another example. Liszt's graffiti on Mozart. The technical went before the atmospheric. Sometimes it's the other way around. There is no genius loci, everything evolves, or metamorphs. Nothing degenerates, except for useless fucking shit.
If you strike me down I shall become more powerful than you could possibly imagine.
Top

That piece might almost have been the musical rendition of this; http://www.strangehistory.net/2015/04/0 ... e-willows/ Demonstrates the kinship between the element of fantasy in classical music, and literature (poetry). In the perfect state, you cannot put the one above the other. It's probably the two best things available to humanity. When I have finally accumulated sufficient wealth to enable me to discharge myself from society, I will concentrate solely on those two things.
If you strike me down I shall become more powerful than you could possibly imagine.
Top

you may recognise these from Merry Go Round music

He has it, then loses it, then regains it, then loses it again, etc., like he's having a fit of anger every time he just gets it going for him, and then something or someone just snatches it from his grasp. The musical pendant to: https://en.wikipedia.org/wiki/Person_from_Porlock

The contrast is astounding, like the musical version of the idea of the writer's block, as a psychological phenomenon.

Second half, 10-minute mark, he goes all-out rage, and lets frustration loose, in a phantasmagoric chaos of creativity.

Only the tortured spirits of madmen ever created sublime fantasy art. The human condition, with all its rabble-catering mass-indulgence, pushes true genius of that particular order to the farthest opposite extreme.
If you strike me down I shall become more powerful than you could possibly imagine.
Top

The creeping terror of Poe's magnificent prose-poem, wrapped in a symphonic shroud. No, philosopher, priest, mogul, king, general, politician or patriarch; not even such as yourself, will ever escape Le Destin.

Generations upon clueless generations of uncouth peasants and their beasts of burden will, come wind and rain, for eons trample the sod on the forgotten grave of poor Prince Prospero.

BTW, did anyone ever do a classical piece based on the colourful Satanism of Charles Baudelaire, or de Sade? They ought to have, that triggers me, I'll do a search.
If you strike me down I shall become more powerful than you could possibly imagine.
Top


You will probably hear that Golem was huge, shapeless and only vaguely reminiscent of any human being. This is thanks to his appearance in famous Czech film about Rudolph II. Nevertheless, according to this legend Joseph was at first sight undistinguishable from an ordinary human beings. The only thing he lacked was the ability to speak.

The Golem in Meyrink's book is an invisible entity, a gestalt, and not a "kindred spirit", unless meant in the metaphorical sense. The Golem does in fact never appear in the book, at all. It is a suggested force of the unreal.

The mistreatment of classical myths in movies is laughable. There is a lack of basic understanding of the spiritual, in the process of turning manuscript into cinematography. It is not necessarily a dramatic problem, it's more to do with the lack of compatibility of moods and atmosphere of the imagination, with those of their visual representation. Spiritual terror vs physical shock or horror, as Karloff stated. Based on the writings of Poe. Karloff fully understood this, yet his sole vehicle of artistical expression was the classical horror film.

Classical music does not have this problem. The kinship between literature and sheet music far surpasses the clumsy and oafish boogeyman melodramatics of everything stage and screen, which this genre has ever offered, in that format. It is hopeless to attempt, it cannot work on the spiritual level. The Golem is invisible, it is an unseen, non-existent power pressing down on reality, from the outside. Like a Lovecraftian nightmare. Not insidious, not felt with physical senses, not lurking around the corner, at midnight. But somehow there, interwoven with the fabric of reality, suggestive in an inexplicable fashion, making one doubt one's own sanity, and operating on the spiritual level, alone. Which is where terror abides. A supreme feeling, probably only available to truly imaginative minds.

Not a house of horror, symbolic or otherwise, like Bluebeard's Castle, with all its stock Gothic paraphernalia. Opera also ruins it, with its exaggerated and forced hysteria. Only when the singers shut the hell up, the feeling comes creeping back, only to be ruined again, by another round of shouting.

This one is not really about the weather. It depicts the turmoil of the composer's soul. Two sides to the sublime, in nature. One external, one internal. Both are of unsurpassable beauty, but only one is truly art. So, art is artificial. A human construct. But it is inspired by nature, and thus a part of nature, of the very Cosmos. It is a thing dictated by various intricate chemical brain-based processes by another, greater, power. This is the paradox of paradoxes. And the answer is, there is no true distinction between beauty in nature and art, and even spiritual human affairs of the most subjective kind, are only part of the endless, meaningless eternity, within which all things exist, or have existed, at one time or another, forever. There is no paradox. Art is nature, nature is sublime, and the sublime, simply is. But the human mind adores romanticism, because it enables, and fuels, the cognitive dissonance, particular to our species. We will lie about EVERYTHING, if it suits our temperament, even for the shortest of whiles. Cowards as we are, we automatically attack that which we do not understand, merely because it defies our feeling of superiority, whether inside the herd mentality, or on the personal level. A rather pompous way of saying we suck, but we do. Our only common trait, is our instinctive fear of the unknown. Only the pastoral will do, as the sublime makes us uncomfortable. This is what Nietzsche meant, about gazing into the abyss. It is not the idea of the boogeyman in the dark, as an outside sinister force, it's the unwillingness to see our own nothingimage, reflected by the mirror of the soul.

So we invent witches and sabbaths, senile popes, crosses, and flying hags on brooms. The human condition is one of shameful alibi. Of cognitive dissonance. The mind has invented ways of shutting off the reflection of the abyss. We will never progress beyond that point, we will only adjust, to suit ourselves. "A man's got to know his limitations", as Dirty Harry said.

And so he shall, the little universal irrelevancy that he is. Stephen Hawking was a sentimental old romantic, at heart.

Enjoy the weather!
If you strike me down I shall become more powerful than you could possibly imagine.
Top
Post Reply
185 posts