Racing events, drivers, cars or anything else from the past.
Post Reply
75 posts

Hmm thought that one might have cracked a comment.
*Sebastian, Lance is faster than you... do you understand?*

Ric O'Reilly posted this one in a Oulton Park-related facebook group. It can also be found in the Open Wheel Crashes-section

This is Bert Hawthorne's car after an accident at Knickerbrook in 1970:

New Zealander Bert Hawthorne's Chevron B17 after an off at Knickerbrook, Oulton Park (landed in the small grandstand of the right-hander, luckily empty that day.)1970. Lovely guy who was tragically killed in an F2 race in Germany 2 years later.
A couple of weeks later in the evening he was at the bar at Brands Hatch with a large plaster-cast on one leg, I asked what happened at Oulton, he replied that he had thought he was at Mallory Park & the bend went left but........at that he fell off his bar stool.

Barry Pointon had a workshop accident where he fell down into one of the workshop pits and broke his leg. Mike Marshall, the late Bruce McLean, and others used to play darts at Barrys on a Monday night, after a couple of beers Mike had convinced Barry to let him race the Anglia at the upcoming Grand Prix meeting at Pukekohe


Was a good idea: 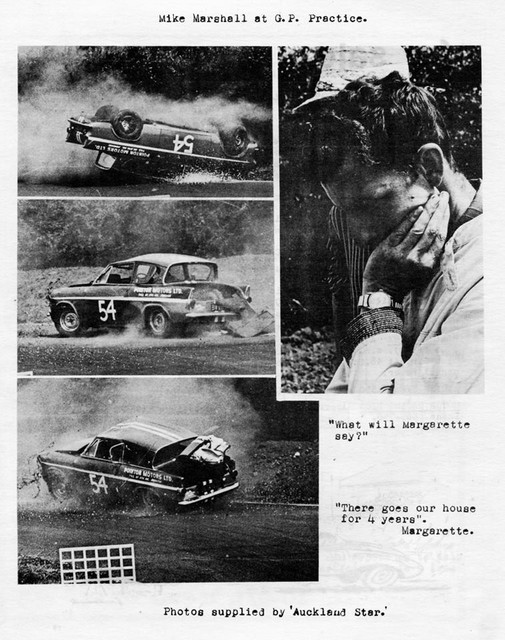 During a red flag in a NASCAR race at Watkins Glen in 2007, A half naked drunk fan managed to jump over a fence onto the track, before leaning into the passenger side window of Matt Kenseth’s car, along with a hat and sharpie marker, requesting an autograph. Kenseth declined saying he was “A bit busy right now” and the fan jumped back over the track wall, before being detained by security while attempting to get back over the spectator fence. I’m guessing he likely never got his autograph and got a free escort out of the track for his behaviour.

Cameras thankfully caught the madness, which starts at 5:24 in this video.

A funny story relating to the times Berger and Alesi had together at Ferrari. (There are many but this is one I had not heard of before.)

This relates to a cruel joke from Gerhard to Jean, during a test in Silverstone. A bit naughty but thats life.
Gerhard relates: "It was raining and we were staying in the pits. When it stopped, I went out for a lap to verify the situation as the circuit was drying. In front of the pits it was entirely dry, but the part far away was completly covered with water.

As I was returning into the pits, knowing Jean, I knew that if he was going out, he would have gone flat out, so I stayed in the cockpit. The engineer arrived and I told him 'let's mount slick tires because it's all dry, let's start the test'. Jean put his helmet on and went out.

In the meantime, I came out of my car and told the crew 'forget it, it's impossible to drive in these conditions'. Next we hear is a loud 'wwaaahhrr!' It was Jean spinning all over the grass!"

Alesi"Yes, you were a real nightmare!". Gerhard:"I played these tricks only to have fun, there was no malice about it, but it took Jean a couple of years to figure it out".

Of course the more famous one relates to Gerhard and Jean, having taken Jean Todts brand new specially made company car from the factory without permission. (A special edition rally based Lancia). I think I have mentioned it before but I found this interview with incident talked about in their own words. This their account of what happened.

We were testing at Fiorano just before the 1994 season started and we went for lunch at the restaurant near the circuit. After lunch we go back to the little office Jean had near the track and someone calls to say the car is ready and we must start testing again. It was three weeks before the first race, a brand new car, first time out at Fiorano so, you know, it was an important test. We realised neither of us had a car to get back to the track so we found this nice new Lancia in the car park; the keys were in it, so we just took it.

“So we set off. Jean was driving like an idiot; I put the safety belt on and I said: ‘OK, you do what you want,’ and I started playing with the handbrake. People were already jumping out of the way, we were completely sideways, down this road towards Fiorano, and we went past the guard at the gate, Jean was flat out, sideways into the circuit. And there was the new car, in the pits, in front of us, the mechanics working on it.

“I pulled the handbrake on and – I don’t know why – for some reason, the bloody car started to take off and we started to fly. We landed heavily on the roof and it collapsed, like paper, down onto the seats. Jean wasn’t wearing his seatbelt, his feet were hanging out of the window and I was hanging, you know, like this,” – he’s hysterical with laughter now, acting out the chaotic scene – “and we came to a halt about six feet in front of the new F1 car and the mechanics, it was like a crazy film. We couldn’t get out of the car, we were trapped.

Anyway, they pulled us out, and Jean was bleeding, he’d cut his head and his knees, and the funny thing was the Fiorano ambulance was there and they got very excited because they hadn’t had to do any work for 25 years… The doctors sit there, with the engine running, every time there’s a test day… and now they had a shunt. They ran around and took Jean to the local hospital and I thought, shit, now we’re in real trouble. So anyway, we cleared up the mess, put the wreckage out of the way in a corner and threw some kind of sheet over it. Then along come Montezemolo and Todt and I thought, shit, now we really are in big trouble. We are out of a job, and it’s three weeks before the first race.

“I didn’t want to talk to anybody, I thought, OK, I’ll go out, do a race distance or something, let it all calm down. So I put the helmet on and got in the car. When I had to come back to the pits I saw Todt there and he was talking to Montezemelo and it didn’t look too good, so I kept my helmet on.” Berger is now creased up, reaching the climax of his favourite Alesi tale.

“Nobody is saying anything to me, I can’t understand it, so I said to Todt: ‘What do you think about the accident, about the roll-over?’ and he looks at me and says: ‘Gerhard, can you talk normally? I don’t know what you mean. Did you have an accident?’ and I say: ‘Kind of, yes, we kind of…’ and Todt says: ‘Where’s Jean, where’s Jean?’ and I say: ‘Well, Jean’s gone to the hospital for a moment…’

Now Todt is really getting upset and he says: ‘You’re idiots, three weeks before the first race, you shouldn’t be messing around like this. And where’s the car?’ So I said: ‘Well, it’s over there, under that sheet’, and you know – this is the best bit – it was Todt’s car. We’d taken his Lancia from his car park space and now it was a wreck. This is just the funniest thing that ever happened with me and Jean. We still laugh about it whenever we meet. You couldn’t make it any better if you made a film about it.”

That’s amazing. You could probably write a book with all the pranks Berger pulled during his time in F1.
Top

Quite a character.... Berger was quoted as saying, “Senna taught me to drive, and I taught him to laugh.”

Another one re Berger back in the early days of his career when he broke his neck in a road car accident....

It nearly ended his career just as it was beginning. Word had gotten around that Berger had killed himself in that accident, so his team boss was slightly shocked when Berger, after leaving the hospital early, arranged to meet at a restaurant to discuss the upcoming season.

Berger’s neck had been encased in plaster to help the vertebrae heal, which weakened the musculature and rendered his neck a bit of a noodle. Unable to support the weight of his own head but intent on convincing his team boss, Jackie Oliver, of his fitness and readiness for the next season, he removed the plaster, and quietly held his head in his hands. Like a young boy listening in awe about the world of F1, Berger’s held this pose for the length of the business discussions, and convinced Oliver to sign him for the following year. Had he removed his hands, his head would’ve hit the table, but he kept his form kept up the act. He could heal later.

Another lesser known prank : Ron Dennis fell into Berger’s crosshairs several times, once most notably while diving in Australian water. About fifteen meters below the surface, Berger decided to close off Dennis’ oxygen bottle. “He shot up like a rocket. It was looking good for me, but he didn’t find it so funny”.
*Sebastian, Lance is faster than you... do you understand?*

Richard Petty’s crew forgot to fill his gas tank before qualifying at Riverside in 1963, Oops!
Top

During the 2013 Sprint Showdown, a strange glitch with broadcast graphics meant David Gilliland’s name was seen driving 14 different cars. 0:20 - 1:38 in this video.

Just found this one on Facebook. And what shall I say?!.... I guess times really were different

Can't find the 8 mm movie right now, but does anyone remember the lioness that people brought with them and parked in the outside esses? Winston Cup races.
One year the brought her in a uhaul van body truck.
She was getting pretty big by then .
You could go up an pet her, very tame.
Well ,after a LOT of beers , I'm petting her and either I asked, or the owner said, I could get up there in the truck with her.
They said just don't make any quick moves!
We'll, this is no BS, I think she fell in love with me and decided to jump on my back and had her mouth around my head ( her claws were smooth and no sharp teeth).
The owner yelled and said don't move until we grab the tie down ropes.
They pulled hard and I scooted out of there like I was on fire!
All ok, but when I got home that night, I had to explain the bruises on my back!!
ALWAYS had fun at Riverside!!

Are times really that different given the attention Tiger King is getting?
Founder and Life President: Lance Stroll Hate Club

No idea who /what Tiger King is/was or what he did......
*Sebastian, Lance is faster than you... do you understand?*

Everso Biggyballies wrote: ↑
5 months ago
No idea who /what Tiger King is/was or what he did......