ATTENTION GPL FANS! We are voting for our favourite Grand Prix cars of the 1960s!
Let us know your favourite here: LINK

Racing events, drivers, cars or anything else from the past.
Post Reply
5 posts • Page 1 of 1

Posts: 99
Joined: 14 years ago
Location: Over the edge

Dragging up an old memory here - back probably 20 years ago when we first got Sky Digital, I recall seeing a general motorsport programme - if anyone remembers it, the title credits had a Dakar Rally Land Rover Defender, in the sand dunes, doing a huge jump towards camera and destroying itself as it landed. Part of the programme covered an event at Santa Pod drag strip. One of the entrants was a black 2-door Ford Cortina mk3, road registered, running a Cosworth DFV!

I've never found any mention of it since, nor any reference to any other kind of DFV powered road car / vehicle that someone has attempted (barring the Ford Supervan 2 - I think that had a DFL in it). Has anyone else ever head of one?
"I decided i was going to go into it flat, so i did" Nigel Mansell, 1990 Mexican GP
Top

Williams had a Renault van with a full house V10 Renault F1 and running gear fitted.
*My woman cant wrestle. But you should see her box!*

I tried to post a link of a youtube vid of it but Im using an Apple laptop and I have no idea how to drive it. Search YT for Renault Espace F1. Sounds great and looks pretty rad. Dont think it was road registered though.


Edit... im back home for a couple of hours and found this pic of the interior showing 4 seats in it. 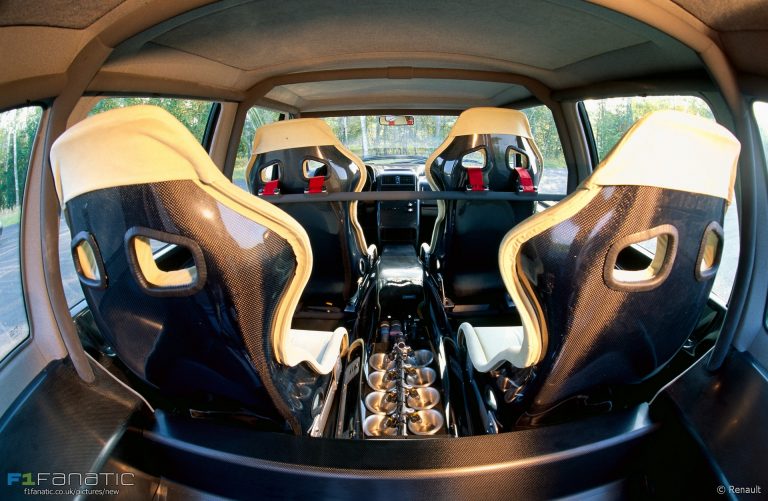 Plus a couple of video links....


This is quite a good one..... SFW himself talks about it and gets strapped in and taken for a few laps of Ricard.

I found reference to a road car running a DFX, which IIRC is the Indycar adapted version of the DFV....
Having said it is a road car, and I saw mention it was 'roadworthy', the pic is from a for sale ad describing it as a race car There was also the shortlived Alfa 164, built by Alfa for the then cancelled Procar series.... cancelled because of a lack of support from other manufacturers. It was powered by a V10 F1 Alfa engine and with a racing chassis and looked like a standard road car, with wider wheels. No flared arches or anything like that.

I read after a test session they drove it to the local pasta shop / supermarket. In fact it mentions it in the video. Posts: 99
Joined: 14 years ago
Location: Over the edge

Thanks Everso, I had forgotten about the Espace F1 and the Alfa 164 Procar. Both look badass

If I remember right, there was some involvement from Brabham (or Brabham employees) in building the 164, as Fiat / Alfa had bought the team in '88 from Bernie, who's idea it was about the Procar series?