Racing events, drivers, cars or anything else from the past.
Post Reply
3370 posts

erwin greven wrote: ↑
2 months ago
Is it an airfield track?

No not an airfield track.
*Sebastian, Lance is faster than you... do you understand?*

Ah I was going to say Lowood, but that is an airfield track I think.
King of the Race Track, Destroyer of Tyres, Breaker of Lap Records
Top

You would be correct. Thought you might find that one easy...
*Sebastian, Lance is faster than you... do you understand?*

PTRACER wrote: ↑
2 months ago
Ah I was going to say Lowood, but that is an airfield track I think.

Yes that was a WW2 Airfield track, like Silverstone, Goodwood etc.
You got the first letter right though

(Even if you got the country wrong.... Levin is NZ.

In fact New Zealand's first permanent motorsport facility, and based inside a Horse Racing layout.)
*Sebastian, Lance is faster than you... do you understand?*

You would be correct. Thought you might find that one easy...

A bit more info on Levin:

It all started with an Englishman named Ron Frost MBE. who brought his love of racing to New Zealand and based himself in Levin. The Levin motor racing circuit was sited inside the horse racing track which was located between Hokio Beach Road and Mako Mako Road down towards Lake Horowhenua. It was opened in January 1956 with its inaugural race held on the 14th January 1956 and was organised by the Levin Car Club. The track was approximately 2.4klm long and was roughly the shape of a pair of racing googles. Being a short but tight track it suited the smaller cars with engines from 1lt -2.5lt. There were 3 race meetings in a racing season which started in September and finished in April, with the exception of the 1969-70 and 1972-73 seasons which had 4 race meetings.

Levin was round 1 of 8 in the Tasman Series, and there were 16 Levin Internationals held between 1958 & 1975 and featured high profile drivers from New Zealand and overseas, Denny Hulme, Chris Amon, David Oxton, Graham McRae, Bruce McLaren, Bryan Faloon, Graham Lawrence and Frank Radisich all from New Zealand, with Jack Brabham and Kevin Bartlett from Australia, Jim Clark and Jackie Stewart from Scotland and Stirling Moss and Graham Hill from the UK.

April 1961 race meeting No:16 saw the only fatality at the track when Duncan McKenzie rolled his car at Hokio Bend during the 3rd race. He was taken to Palmerston North Hospital where he was pronounced dead on arrival. Although there was only one fatality the track saw it's fair shear of crashes, and most walked away with just a few bruises and an injured pride, but there was at lest 3 drivers that were hospitalised with serious fractures and burns.

15 January 1966 race meeting No:30 saw one of the largest spectator turnouts with a crowd of around 23,000, and also a demonstration of mini-spinning, the equivalent of todays boy racer burn-outs

6 September 1969 race meeting No:41 was the first of two special race meetings, the Rothmans 4hr Production Saloon Car Meeting. The cars were standard production manufactured cars with at lest 500 of each make and model being sold world wide and they were not allowed to be modified. The race was won by G. Sprague / B. Cottle in a Fiat 125 / 1608cc engine, completed 206 laps, 2nd was R. Collingwood / A. Boyle in a Riley Mk2 / 1275cc engine, completed 205 laps and 3rd was J. Kennedy / R. Rutherford in a Ford Zephyr V6 / 2994cc engine, completed 201 laps.

16 September 1972 race meeting No: 51 was the second extra race meeting which was the Shell 100 Saloon Car Meeting and was the first round of the 1972 Castrol GTX Championship. It was also the first ever Mini Sevens event for 850cc minis.

Not only were the length of the races changing so were the cars. The most popular make of single seater racing car in the early years was the Cooper T with a 2249cc 4cyl engine, ran narrow tyres, spoilers/ air foils/ wings were not even invented, neither were roll bars and most car bodies were made with thin sheet metal. As the years progressed and composite materials were being developed and introduced to the world markets race car designs started to change as well as the weight of the cars, and with bigger engines and lighter bodies the cars were now going faster and this equated to less grip on the track, so to counter this problem wider tyres made of different compounds were tested in the hope of giving the cars more grip. This worked to a point but cars were still having problems cornering and this is were the spoilers/ wings helped. The idea was to reduce the air flow under the car, thus creating a vacuum which sucked the car onto the track allowing faster corner which lead to faster lap times and more exciting racing and by 1975 the most popular single seater race car was the Lola T with a 4995cc V8, and car manufactures were starting to produce their own race cars and pit crews and paying top drivers to drive for them. Some of the top international drivers were starting to develop their own custom built race cars, with the likes of McLaren, McRae, Hulme, Brabham and Amon still around today.

The largest piston engine car to race on the Levin track was a Ferrari 357 powered by a 4493cc V12 and was driven by Ron Roycroft, with the smallest being a Cooper MKX powered by a single cylinder Norton 515cc engine driven by Syd Jensen. Both cars were raced in 1958. The largest cc rated engin was the 4495cc V8.

43.3 seconds was the fastest recorded lap time and it was posted in 1973 by Graham McRae driving a McRae GM1 powered a 4495cc Chev V8.

The main sponsors for the Levin International / Tasman Championship meeting were; Rothmans up until December 1971, Winfield from 71-74, and Peter Stuyvesant from 74-75.

The last race meeting was held on the 7th December 1975as the 20 year lease was due to expire, the facilities needed an upgrade which the car racing club had no money for due to the dewindling and the rapidly expanding horse racing club needed to rip up part of the track for there explanation so the motor racing moved to the new Manfield Race Track on the outskirts of Fielding that was opened in 1974.

You would be correct. Thought you might find that one easy...

That counts as an unfair advantage, right? 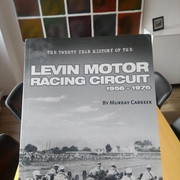 The tires on the inside of the track and the radius of the corner somehow gave it away. But I have to admit, after seeing your recent post in the Random Motorsport Pictures thread, I was really uncertain.


I currently do not have a picture at hand.
You wanna have another go? Or maybe @John, @MonteCristo, @PTRACER?
Top

I recognise the trees so I am pretty sure I know it so I will leave it for someone else.... nice pic of a couple of Lotus 24's is all I will say. at this stage.

Winning isn't everything, but it's somewhat better than finishing second! -- Bruce McLaren
Top

Surely the glen with those colours
Top

White six wrote: ↑
3 weeks ago
Surely the glen with those colours

I was going to throw a spanner / red herring in the works by talking of an Ireland connection.... (the leading driver is Innes Ireland.

Anyway, it is @hollie3sa question so the official yay or nay should come from him.

Regardless of the answer it is a beautiful picture.

Yes, it's Penske in Lotus '943' following Ireland in '942'. Penske hired Ireland's early-season car for the North American races; they finished 8th and 9th in a race dominated by the Clark/Hill battle for supremacy.
Winning isn't everything, but it's somewhat better than finishing second! -- Bruce McLaren
Top